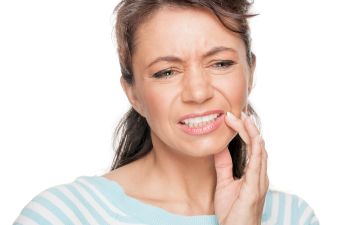 Teeth grinding, or bruxism, is an oral health problem, but it might be caused by obstructive sleep apnea – which is why it is also considered a sleep-related movement disorder. If you have sleep-related bruxism, you uncontrollably and involuntarily move your jaws when you sleep.

This repetitive jaw-muscle activity results in teeth grinding or clenching that can significantly damage your teeth, wearing them down and exposing their structure to infection and decay. Teeth grinding can also lead to other health issues like migraines and gum disease.

How Do You Know If You Have a Teeth Grinding Problem?

If you feel the following symptoms, you may have bruxism:

What is Obstructive Sleep Apnea?

Obstructive sleep apnea is characterized by diminished oxygenation due to increased breathing effort as the upper airway becomes obstructed. It may or may not cause awakening; however, most people wake up frequently, sometimes gasping, choking or snorting.

The Relationship between Sleep Apnea and Bruxism

It is still unclear if there is causation or only a correlation between the two disorders. Nevertheless, there are several hypotheses for obstructive sleep apnea and bruxism co-occurrence.

In one explanation, researchers say that the air passage blockage arouses a stress response felt throughout the body. It sends stress hormones traveling through the bloodstream, which cause the jaw muscles to seize up, resulting in teeth grinding.

In another explanation, researchers argue that the muscle movements of the mouth involved in chewing help reopen the constricted airway, leading to teeth grinding.

In yet another explanation, researchers view bruxism as part of the body’s response to protect itself from sleep apnea’s effects. They say that the jaw movement helps to lubricate the tissue in the throat, which has dried out after resorting to mouth breathing.

Dr. Suway of the Atlanta Sleep Apnea Treatment Center is highly trained in treating bruxism. He can help you discover whether the underlying cause of your teeth grinding is sleep apnea or otherwise and provide you with a more permanent solution.

You may also need to see a dentist if you are experiencing oral pain from damaged teeth. Hopefully, your condition hasn’t reached this point yet, and you can rely on us to provide an effective and affordable method to save your teeth. So, contact our office today if you are ready to sleep better and preserve your smile!